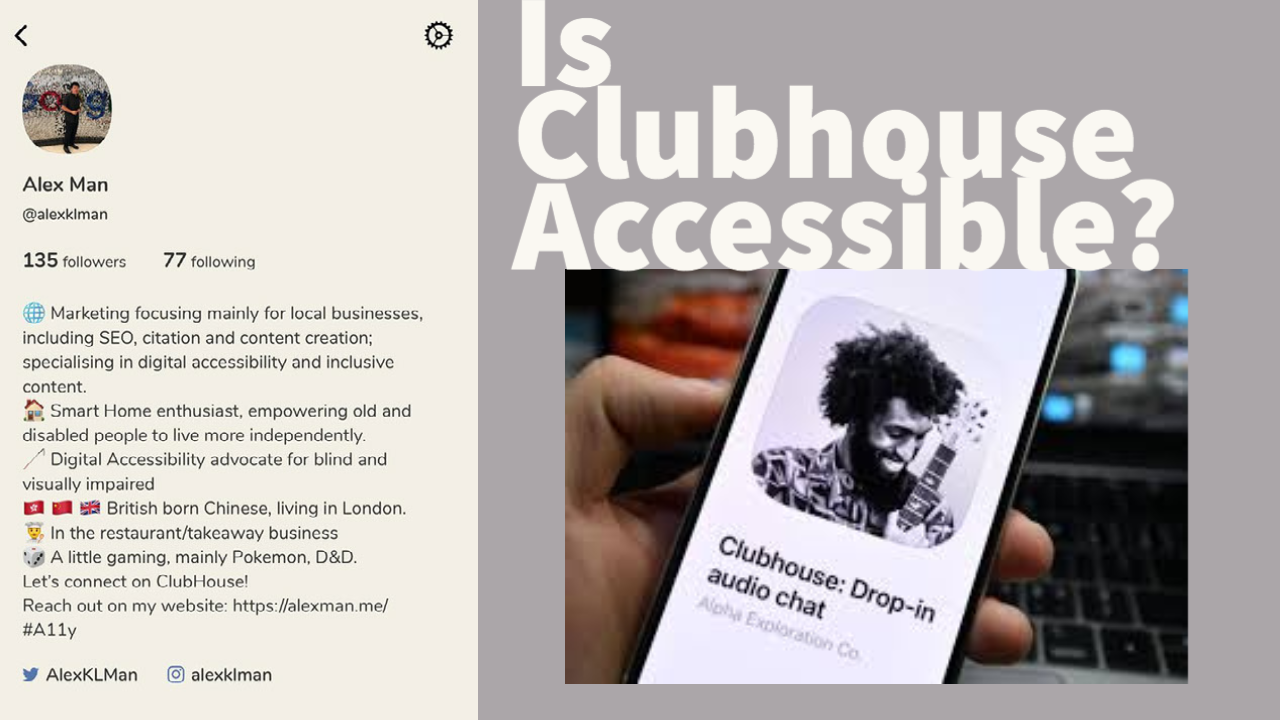 ‘Oh boy, yet another social media platform’, I hear you say and hear your VoiceOver announce out loud as you read this line. It is a fair point; it is yet another social media platform, albeit being audio only. However, it is so much more. Think of it like listening to a podcast live, and being invited on stage to give your opinion and share your own experiences; a bit like a radio show.

Similar to a traditional clubhouse, it is currently invite and iOS only, so there is an exclusive element too, if you like that kind of thing! Despite its exclusivity, I have met a diverse group of people on there. As some of you may know I’m a BBC (British Born Chinese) and on my first night I joined a room with over 100 other east Asians from all around the world for over 4 hours. We didn’t know each other, but yet we were united over a couple of common things; our race and culture. Throughout the night I heard stories of horrific racist attacks that had happened as racist backlash due to Covid-19, on the other hand, happy stories, celebrating  the Luna New Year and so much more. Although people were invited on to speak, it did not feel like they were talking at us but with us, after each speaker, another person would chime in with similar stories.

I first heard of the app via a Forbes article, where the author was calling out all of  Clubhouse’s accessibility shortcomings, and the ways in which it excluded disabled users. It was pretty critical, and although, I consider the author to be credible, I found his argument in this case to not be particularly constructive. for example, where he admitted that while preparing for his review, he hadn’t in fact attempted to ‘join a room’ – the main feature of the app! This is comparable, to me going in a restaurant, sitting at a table for 5 minutes, walking out, and later proclaiming the food to be rubbish, and then writing a 1 star review on TripAdvisor. This is understandable, if the app was completely inaccessible to the point where it prevented you from joining a room, and according to older Clubhouse users with particular accessibility needs, this has never been the case.  In summary, the author outright claimed Clubhouse to not being an accessibility-conscious organization, the end.

I thought this was quite unfair, so I decided to give the app a try.

So, is Clubhouse accessible?

Mostly, yes. When I signed up on the 10th of February 2021, I experienced very little accessibility issues during the signup process, just a weird onboarding button. Rooms were read aloud, as I browsed, profiles of others were read out too, and I was able to take actions such as ‘follow’, ‘join rooms’ and ‘speak’. I was told later on, that a lot of the earlier accessibility issues were resolved due to a significant update, released on the very same day of my signup. Many people on social media credited the article for forcing the change, but perhaps those who made such claims are unaware that it normally takes over two days for Apple to approve an update, let alone the time it would have taken the developers to implement the code; so either other people had already raised these issues previously, or perhaps, Clubhouse was already on its way to improving and resolving its accessibility issues.

In fact, I was even able to host my very own room!

Hosting my very first room: Why Clubhouse is indeed an accessibility-conscious organization

On Thursday the 12th of February, I hosted my very first room, talking about Accessibility for VoiceOver users on the app, a bit of a HowTo/hack/tutorial room. It garnered a lot of interest, with people joining and sharing experiences. Originally, I was going to host it for 30 minutes, 1 hour tops, but more and more people joined! Those who joined ranged from those in the accessibility field, to people who ran recruitment rooms and were looking to make their rooms more accessible, so it went on for over three hours; with one surprise guest dropping in during the last hour…

Daniel Hammond, Clubhouse’s developer, joined the room and was listening to users’ feedback before he announced himself. He said, due to the size of the team behind Clubhouse, he is the only person developing the app, and what we were saying was in fact extremely useful and informative. He asked questions to members, people provided even more feedback on accessibility issues, and he took note.

Everyone was respectful, there was no negative comments on the lack of accessibility on the app in the past, just a group of people coming together, sharing their personal feedback and problem-solving to make this app better for everyone!

Is Clubhouse for me?

It depends on what you want, but I do believe it is for everyone; for those professionals wanting to network, it is like an audio LinkedIn, for those who might follow someone on social media but haven’t spoken to them before – it is great to finally put a voice to that name – and yes you should totally follow me on there too, AlexKLMan on Clubhouse!

How do I join Clubhouse?

As mentioned, it is invite only and only on iOS. If you do not have an invite but use an iOS device, I urge you to still download the app with your phone number, and those who are already on there will allow you in without using up an invite.

If you are new to Clubhouse and want some accessibility hacks, feel free to join my room this Thursday the 18th of February at 8pm GMT. I will also aim to run these rooms the same time every week to get everyone onboard and using Clubhouse. Follow alexklman.

I would just like to end this post with a short comment, I understand how frustrating it feels when things are not accessible, it feels like, yet again, no one is prioritising the accessibility of their app, service, website, and it feels like they neither care nor understand! So naturally the best person to vent your frustration at will be a developer of an app or a business owner. Speaking out is the right thing to do, as only by doing so, these changes are made, but I encourage a constructive approach. Always bear in mind, most service providers and businesses, want their products and services to be inclusive, even if they are not driven by implementing accessibility because it’s ‘just the right thing to do’,  they will be driven by money, more active users equals more money! If you have reached out and nothing has come of it, feel free to move on to another competitor, it is their loss, not yours! We might be the minority, and one person’s voice on its own may have only a little effect in the scheme of things, but I, with many more others are now campaigning for change, together we can raise awareness and ensure that accessibility no longer be simply a ‘minor’ issue!